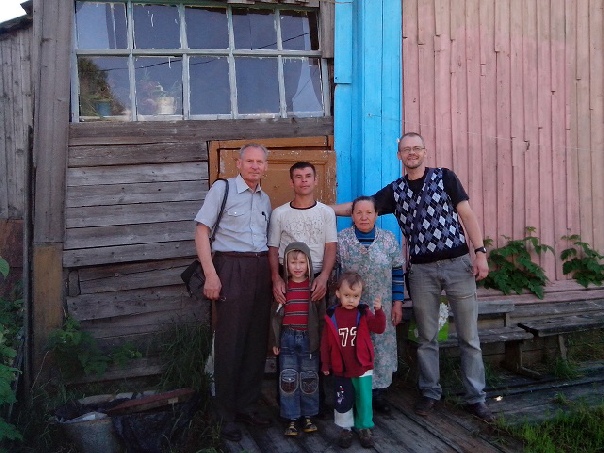 Visit of brother Waldemar to Ust-Kulom district: In July 2013 an elderly brother from Germany called Waldemar came to visit Ust-Kulom district. Waldemar is 75 years old and his greatest desire is to help spread the Word of God in the Komi Republic of Russia. He was born back in the times of Stalin, and because his family was German they were sent to the village of Teamsher (Ust-Kulom district) to die there.  His father died in the forest and his mother died of starvation in the 1940’s. Waldemar  was brought up as a Lutheran yet he never had a personal relationship with the Lord until the Lord touched his heart and Waldemar realized what Jesus had done to him. Later he moved to Germany and had 6 children. Ust –Kulom district has always been on his heart and he has made many trips to Komi recently, Waldemar sponsored the construction of a Baptist church house in the village of Teamsher. Waldemar and Andrey have been in touch with each other for several years now and when Waldemar came to Komi in July 2013 he contacted Andrey in order to preach the Word in Ust-Kulomdistrict together. He invited Andrey and Simeon to come to Teamsher several Sundays in a row to share the Gospel with the locals at the Baptist church house in Teamsher. Brother Waldemar is such a blessing to the body of Christ in Ust-Kulom district! He comes to the district once a year and every time it is an endeavor to spread the borders of the Kingdom even farther. In this picture:  Waldemar, Roman (a local brother), and Andrey with his children visiting Albina in the village of Dereviansk.