Andre was born in 1978 during the times of the USSR. He can recall the time when he was a pioneer (member of the Soviet communist youth organization with almost mandatory membership). Atheism was the official policy of the state and that was the reason why the communist system finally collapsed in 1991. In the late 80’s Christian ministries started coming to the USSR. Andre started reading his first Bible in the early 90’s and was fascinated by it. Then a friend of his invited him to a Christian church that had been started by a few Christians from Louisiana. Thank God for missionaries! He got saved in that church and the foundations of Andre’s faith were laid in that congregation. When Andre went to college in 1995 his faith faced a serious challenge and he backslid going back to the sinful ways. But a couple of years later he listened to a Christian radio station and God through the preacher really convicted Andre and he rededicated his life to the Lord. Since that time he has been in love with the Word of God. In 2000 Andre graduated from college and started working as a translator. In 2003 William Wood contacted Andre in Moscow and they decided to move to Komi (Northern Russia) to minister together. Simeon joined the team that very year and the Lord led them to Ust-Kulom district where they settled down in the village of Don. That was the beginning of the Don church. In summer 2013 the Don church celebrated its 10th anniversary!!! Andre is glad that he made that decision in 2003. The ministry team has seen God deliver people from their addictions, save sinners and establish a blessed congregation from scratch in Don in these 10 years!!! Andre became pastor of the church about 9 years ago. The Lord blessed him with Lena (his wonderful wife) and 2 children (Aaron (5) and Daniel (2)). Back in the past Andre heard the Gospel from missionaries, and now he is a missionary and is preaching the Word in Komi. Praise the Lord! Andre gives ALL GLORY AND HONOR to the KING OF KINGS for HIS MERCY AND BLESSINGS!!! 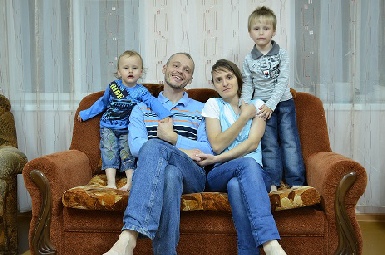